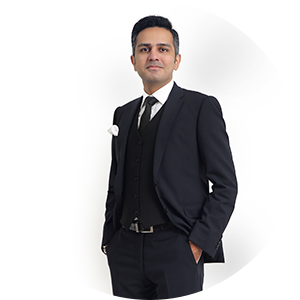 Umer Akram Chaudhry has over ten years of experience in handling a wide array of work in dispute resolution, transactional, and advisory practices. Qualified as an Advocate of the High Court in Pakistan and Attorney at Law in New York, his primary focus is on domestic and international dispute resolution. He has appeared as counsel before a variety of fora ranging from the Lahore High Court and the High Court of Sindh to international commercial courts and arbitral tribunals in litigations and arbitrations.

Umer started his career as a litigation lawyer at Raja Mohammed Akram & Co. in Lahore, Pakistan, where he was engaged in various commercial and constitutional cases. He was engaged in landmark constitutional cases before the Lahore High Court and the Supreme Court of Pakistan. He also represented clients in regulatory matters before the Securities and Exchange Commission of Pakistan and the Competition Commission of Pakistan.

Later, Umer moved to Singapore and worked at Clyde & Co LLP and Rajah & Tann LLP, both internationally ranked amongst top-30 international arbitration practices. He was engaged in a breadth of cases arising from different common and civil law jurisdictions in South and South East Asia and Middle East. He was primarily involved in commercial, joint venture, shareholders, energy infrastructure, and hotel management disputes. He also worked with a well-known arbitrator in Singapore and assisted him in a number of international arbitrations around the world.

In addition to his disputes practice, Umer maintains an active advisory and transactional practice. He regularly advises businesses with respect to regulatory risks and affairs and represent them before regulatory bodies in Pakistan. He has also acted for clients in complex contractual negotiations, drafting, and execution and advised them during the performance stages and in settlement discussions.

Umer is a member of the Adjunct Faculty at the Shaikh Ahmad Hassan School of Law at the Lahore University of Management Sciences (LUMS), where he delivers courses on international commercial arbitration and civil procedure. He writes on topics related to international arbitration and dispute resolution for various publications on regular basis and has been invited to various conferences to speak on legal issues. He is the co-author of the Pakistan Chapter of GAR Investment Treaty Know-How for the Global Arbitration Review and the Pakistan Chapter for the Global Arbitration Places Guide prepared by the Delos Dispute Resolution.