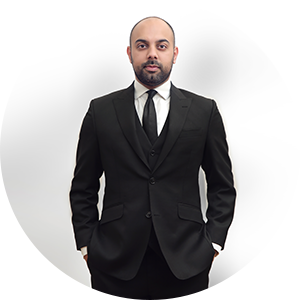 Asad Ladha is an Advocate of the High Courts of Pakistan and was called to the Bar of England and Wales (Lincoln’s Inn) in 2009. After the completion of his legal studies Asad practiced as a litigation lawyer in London, UK. In addition, Asad has also previously acted as a Legal Adviser to the Ministry of Justice, UK.

Asad has a broad practice encompassing commercial, tax, constitutional and general civil litigation. He acts for a wide range of clients, including multinationals, government and public bodies, non-governmental organizations and private individuals. He regularly appears before, and has also represented, a number of regulatory bodies including the State Bank of Pakistan (SBP), the Competition Commission of Pakistan (CCP) and the Securities and Exchange Commission of Pakistan (SECP).

Asad acts and advises on a range of commercial issues and in particular has experience of shareholder disputes, applications against directors, applications under the Companies Act 2017 and Insolvency proceedings. Within his Commercial practice, Asad has represented clients from a number of industries including Banking, Cement, Food and Beverage, Oil and Gas, Manufacturing, Pharmaceuticals, Telecommunications and Textiles.

Asad has extensive experience in Oil and Gas sector litigation. He has previously advised and acted for a number of oil and gas companies in relation to their contractual disputes with their Joint Venture partners over the interpretation of, and compliance with, Crude Oil Sale Agreements (COSAs), Petroleum Concession Agreements (PCAs) and Joint Operating Agreements (JOAs). Asad has also successfully represented a major multi-national oil and gas company in complaints filed against them by the Environmental Protection Agency before the Environmental Protection Tribunal, Khyber Pakhtunkhwa (KPK).

Asad has built up a considerable practice in the public procurement sector. He has previously acted for a consortium comprising local and foreign companies in litigation relating to the procurement process conducted by the Civil Aviation Authority for the award of licence to deploy, operate and maintain a Common Use Passenger Processing System and Baggage Reconciliation System in airports throughout Pakistan.

Due to his experience of both Pakistani and foreign jurisdictions, Asad has built up considerable expertise in contentious civil, commercial and tax matters with an international element. For example, he has recently advised and represented a large state-owned Chinese energy company in relation to a multimillion-dollar contractual dispute with the Oil and Gas Development Company Limited (OGDCL). In addition, Asad currently acts for a major Chinese energy company in a substantial multimillion-dollar tax dispute concerning the question of what constitutes Pakistan source income of a foreign company for income tax purposes.

Asad also has a wealth of experience in conducting local arbitrations in Pakistan under the Arbitration Act, 1940. He has previously represented a major oil and gas company in a multimillion-dollar dispute with its Joint Venture partner and has also represented a major Chinese company in its dispute with the Oil and Gas Development Company Limited (OGDCL) worth more than US$50 million regarding imposition of liquidated damages and encashment of bank guarantees due to alleged delays in the completion of an LPG Gas Processing Plant.

Asad has served as an Editor of the prestigious International Organisations Law Review published from the Netherlands. He has also contributed to the book titled “International Institutional Law” (Martinus Nijhoff Publishers). Asad has previously been a member of the visiting faculty at The Institute of Legal Studies (TILS), Lahore where he lectured in Human Rights and Public Law.

Asad heads the Islamabad office of the firm.