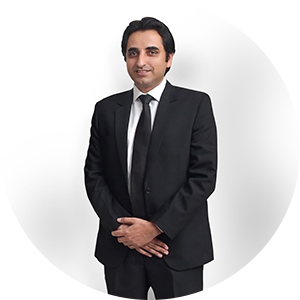 Malik Ahsan Mehmood started his career as a lawyer in 2005, assisting Mr. S. M. Zafar, in various commercial and constitutional cases, at one of the most well reputed law firms in Lahore. In 2006, Ahsan joined Raja Mohammed Akram & Co. as an associate and was made partner in 2018. He has been a practising litigator for 15 years and has appeared before a variety of fora ranging from the Lahore High Court, High Court of Sindh, Peshawar High Court, Islamabad High Court to various tribunals including Customs Appellate Tribunal, Inland Revenue Appellate Tribunal and the Environmental Tribunal. He has been serving as the Federal Tax Ombudsman since 2008.

Ahsan handles a wide range of legal disputes at the firm for corporate and commercial clients, as well as high net worth individuals. His area of expertise includes customs and taxation laws, constitutional law, real estate and property law, labour law, family law, and intellectual property law. He has specialized knowledge of the textile, oil and gas, food, steel and cement sectors. Ahsan has recently represented a leading cement manufacturer challenging the levy imposed by NEPRA under the NEPRA Act 1997 at the Lahore High Court.