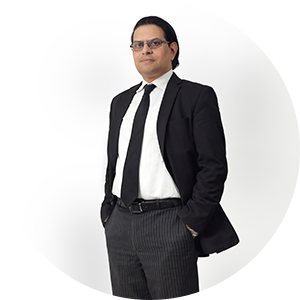 Salman Akram Raja is an Advocate of the Supreme Court of Pakistan and has around 30 years of vast experience in all forms of dispute resolution. He is particularly recognized for his successful advocacy before the High Courts and the Supreme Court of Pakistan in a number of far-reaching and landmark constitutional, commercial, and corporate cases.

Salman started his practice in Lahore and quickly rose to prominence as a successful practitioner. At an early stage in his career, he acted as counsel in major corporate and commercial disputes as well as constitutional litigations. Later in his career, Salman Raja has acted as lead counsel in a number of regulatory, commercial and tax matters for leading corporations, banks, and public entities. He is regularly called upon to assist the superior courts as amicus curiae on critical legal issues.

Salman frequently acts for and advises private and public sector clients. His clients include major local and international business groups, banks, trade organizations, and corporations. He has particular expertise in the areas of petroleum, gas, and electricity laws, media and telecommunication laws, direct and indirect taxation of domestic and foreign enterprises, private contractual disputes, and disputes arising out of licenses and concessions granted by State entities. He often acts for the All Pakistan Textile Mills Association, the largest trade organization in Pakistan, and its members in matters that cover the entire range of investment and taxation issues. Similarly, Salman acts for the All Pakistan Cement Manufacturers Association and its members. He advises a large number of pharmaceutical manufacturers and has recently represented the Pharma Bureau of the Overseas Investors Chamber of Commerce and Industry (OICCI) before the Competition Commission of Pakistan.

Salman has been involved in significant legal reform projects in Pakistan. In 2001, as a member of the President’s Steering Committee on Higher Education Reform, he helped to draft the Model Universities Ordinance of 2001 that provided for extensive governance overhaul in public sector universities. He has been a member of the Company Law Reform Commission and has also drafted the corporate insolvency and rehabilitation legislation for Pakistan for the Pakistan Banks Association. In 2018, Salman was appointed on the Economic Advisory Council (EAC) constituted by the Prime Minister of Pakistan.

Salman has been a lecturer at the Law Faculty of the Lahore University of Management Sciences (LUMS), the University College Lahore (UCL), and the Government College University (GCU), Lahore. He is regularly invited to give talks on legal and constitutional developments at public forums and is a regular commentator on local and international television channels as well as an op-ed contributor in the press.

Salman is consistently ranked as one of the top lawyers of Pakistan. He has been noted as “a very big name in litigation” in Chambers Asia Pacific. Chambers & Partners recognizes Salman Raja as “an esteemed figure in both constitutional and commercial disputes” known for “his impressive courtroom presence and enviable client roster“, who is “thoroughly recommended” because he is “very eloquent and well read, and can talk on any issue of law.”